YNot Farms in its entry into the business of horses named their horse shows, “Spirit of Excellence” setting the bar for excellence in all their equine endeavours.

In 2003 the owners of YNot Farms began to concentrate their equestrian efforts and it became clear that the sport of reining would become their cornerstone. Their first show was held under the Reining Canada banner which is the Canadian Affiliate of the National Reining Horse Association. To pursue their goals a decision was made to purchase a well-regarded reining stallion Dun It You Won It. This horse had already proven his heart and grit in the reining show pen and had a few progeny on the ground that were deeply reflective of their sire’s qualities. To cement the horse’s success and to anchor their breeding program the horse was campaigned until 2005 when he achieved his Platinum Certificate, awarded by the NRHA to horses winning $20,000.00 in Category 1 in the show pen.

Not only interested in breeding champions, YNot Farms also felt that they should invest effort in support of the equine sports that they were so interested in. They began to host shows for the Ontario Reining Horse Association as well as organize clinics with highly regarded reining clinicians such as Craig Johnson, Jared LeClair, Shauna and Cody Sapergia and Bill Thomas.

Reining had become a very high-profile sport internationally when it was included as the only western riding sport in the World Equestrian Games of 2002, in Jerez, Spain. And Canada won Team Silver! In 2004 the Farm hosted the first Canada Cup Eastern Finals which was a FEI CRI*** qualifier with $50,000.00 in added prize money for the entire RC/NRHA/FEI show. The most money offered in Canada for a reining completion in 2004. This qualifier allowed Canada to field a Reining Team for the next WEG in 2006. The next FEI/CRI** show held in 2007 included the Master and also in-cluded the first FEI Young Riders Medal class for North America for reining . It was stewarded by the late Sandra Sillcox, Steward General of Canada. Ms Sillcox was extremely supportive of YNot Farms efforts and the future of FEI reining and kindly donated her time toward the success of this show. In conversations with Sandra Sillcox it was apparent there was a deficit of internationally qualified stewards familiar with the sport of reining in Canada. YNot Farms also held the first and only FEI Approved Reining Stewards Course during the show allowing for real time experience for those attempting to attain Steward Status. Two candidates were success-ful, and one has gone on to work internationally. These efforts on behalf of Canadian reining competitors were acknowledged when the Farm was awarded the 2004 Corporate Sport Citation Award given out by the Government of Ontario. Additionally, YNot Farms was asked by the Board of the Royal Winter Fair to produce an evening, half hour special during the Royal, demonstrating reining. The centre piece of that evening was YNot Farm’s stallion, Dun It You Won it and their full Arabian reiner, hunter/jumper Sillver.

YNot Farm’s story now takes a twist. Most reining horses are American Quarter Horses but Dun It You Won It was bred to an Arabian mare that was in YNot Farm’s broodmare band. Traverston Giselle produced a nearly flawless colt with the best characteristics of both breeds named YNot Dunny. There had been an upsurge of interest in the Arabian world in the United States for half-Arabian reining horses and the large purses were beginning to reflect that interest. This colt was to be the proof that the direction of YNot Farms was taking would be the right one. In 2006 a trainer was found to start this beautiful, talented but wilful colt. As he learned the basics of spins, stops and lead changes his desire to please and his athleticism became very apparent. His willfulness was redirected and channelled into a determined work ethic. The following year in 2007 would prove YNot Farms and Dun It You Won Its reputation as a sire of half-Arabian reiners when YNot Dunny won the Ontario Reining Horse Association Three Year Old Snaffle Bit Futurity. The first time in the NRHA and AHA’s history that a part-Arabian had won a three-year-old Futurity. A Canadian first and a world first for a half-Arabian reiner and just 33 ms of age.

It was during a summer clinic in early spring of 2008 that Rookie Pro rider Richard Bowden an assistant trainer to Craig John-son of Texas was asked to ride YNot Dunny. It was a great match and both won the 2008 first NRHA Open Morrison Trophy for a half-Arabian AHAEC show at YNot Farms. Plans were put in mo-tion to prepare for the first ever Limited Open Half-Arabian Futurity class, which was also NRHA sanctioned, being offered at the pres-tigious Arabian Horse Futurity in Scottsdale, Arizona in early 2009.

YNot Dunny not only won the class in style but clinched a Top Ten finish which allowed him entry to the next day’s Open Fu-turity for Half-Arabians. This class held big prize money and always attracted some top NRHA riders from the USA. Another Canadian first!

Upon coming home in early spring of 2009, YNot was treated for a torn suspensory, missing the early ORHA reining shows that year. By July, at the ORHA show held at YNot Farms, YNot Dun-nyin his first competition of the season won the ORHA Sired Stakes NRHA sanctioned Derby that included some stiff competition of past champion Quarter Horses. His rider and earlier clinician, with a couple of half days of riding YNot Dunny, was Jared LeClair of Gainesville, Texas, who had already earned in excess of $300,00.00 in NRHA earnings. At the show Y Not Dunny also won the NHOL2 class with rider Jesse Cofell, then proceeded to top money earner for ORHA NHOL2 and Rening Canda NHOL2 champion with riders Dean Brown, Loris Eppis contributing to year end results. What an amazing year 2009 for half Arabian Ynot Dunny

YNot Farms continued to look for avenues to prove the versatility of their half-Arabian reining horse. After a conversation with a neighbour, it was suggested that YNot Dunny could be a candidate for some very competitive dressage. It turns out that neighbour was Joyce Cameron a successful young dressage competitor at the FEI level and someone interested in seeing how this half-Arabian would be accepted by the dressage judges. This was of great appeal to the owners of YNot Farms. With a three-week introduction to dressage and his successful reining training, YNot Dunny was entered in a show at the Cornerstone Summer Dressage Show. Showing at the 3rd Level Bronze he took home three second place ribbons. Again prov-ing the value of a solid reining foundation to prepare for any discipline.

Not willing to send YNot Dunny too far away from home he continued to be shown with success in ORHA reining shows with local trainers. In 2015 YNot Dunny won the ORHA Grande Finale Novice Horse Open Level 2 and the Intermediate Open classes with rider/trainer Harvey Stevens. It was then decided to reach for the NRHA Category 1 Gold Certificate which is $10,000.00 US in Cat-egory 1 earnings. This took many $200.00, $300.00 and $500.00 Cdn added classes to win. No Canadian half-Arabian has ever achieved such a plateau but YNot Dunny may be one of a few or perhaps the first in the world to achieve that goal.

In 2017 YNot Farms reached out to Alain Allard of Quebec. Alain is an extremely accomplished trainer and only one of two Canadians to have won the National Reining Horse Association 4th level pro Futurity in Oklahoma. Under Alain’s guidance and the help of a talented young rider, Darby Mailhot, YNot Dunny continued to accumulate wins and by 2018 he had reached nearly $25,000.00 in life-time earnings and was 11th in the Intermediate Open world NRHA standings out of 1200 competitors and NRHA Gold certificate.

With the confidence and ongoing results achieved with Alain Allard’s training, two more horses were put into train-ing with him by Ynotfarms.. This time they were quarter horses. Alain’s patient style with these mature horses and his owner’s insistence that the time be taken to finish them has paid off. In the spring of 2017 YNot Wowza and half-sister YNot Dolly were Co-Reserve Champions at the Central New York Reining Horse Association CRI*** WEG qualifier in their first major show. 2018 saw major wins and at the Grand Finale ORHA show YNot Wowza earned the top opens score. A son of Big Chex To Cash who is a newly minted Million Dollar Sire, Ynotwowza closes off 2019 being the Novice Horse Open Level 2 Champion for Quebec and Ontario and the Canadian Eastern NRHA Affiliate Champion. Further, he is the ORHA Reserve Open, Intermediate Open and Limited.

Open Champion. As of this writing he is top ten NRHA World, Novice Horse Open Level 2, Intermediate Open and Limited Open. Canadian horses and riders NRHA earnings are discounted approx-imately 25% due to the exchange rate so Canadian reiners have to ride a little harder to earn NRHA money.

One of the biggest lessons YNot Farms has learned and promoted are that the basics of reining training can be used for any discipline that may lie in that horse’s future. YNot Farms has produced reining horses, dressage horses, and hunter/ jumpers from part-Arabs, full Arabs, Quarter Horses, Paints and a handsome Warm-blood. Each of these successful individuals have all been started in reining before going on their respective disciplines. Many of them have been shown with great success in multiple disciplines just as YNot Dunny has. Compliments come frequently from the horses various riders across what might seem like polar opposite sports regarding the correct and soft way of going each one has, combined with a willingness to participate in a new form of riding.

Alongside YNot Farms belief in reining basics for any discipline, is a dedication to letting each horse develop in his own time. If that individual needs more time to grow up or rest from their training, they are allowed all the time they need. There is no push at this farm to meet man-made deadlines. The results are being proven repeatedly by the longevity of the individual horses in their program. It can be seen in the long, productive and enjoyable lives they are leading and will continue into old age. That is a legacy worth pursuing.

Ron and Gillian Lubinski, the owners of YNot Farms have pursued excellence in their love of horses by always remembering the words of Robert Browning, “A man’s reach should exceed his grasp, or what’s a heaven for?”. 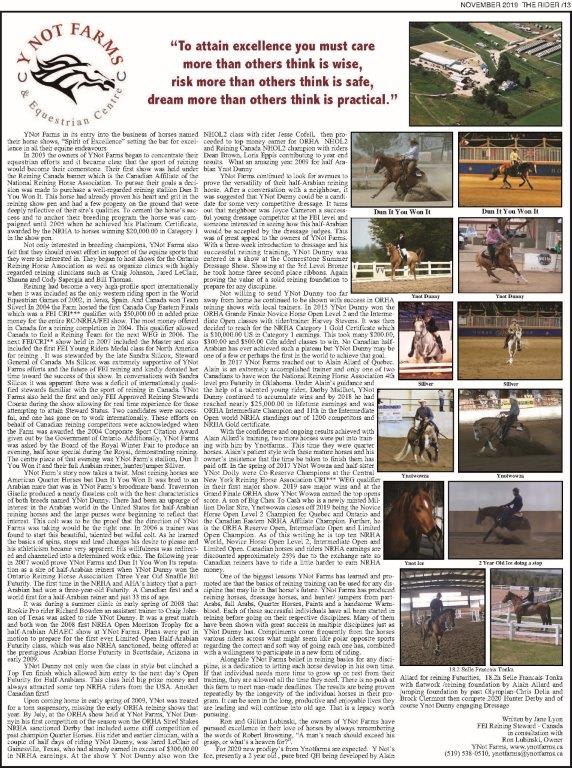