Remembering Dun It You Won It 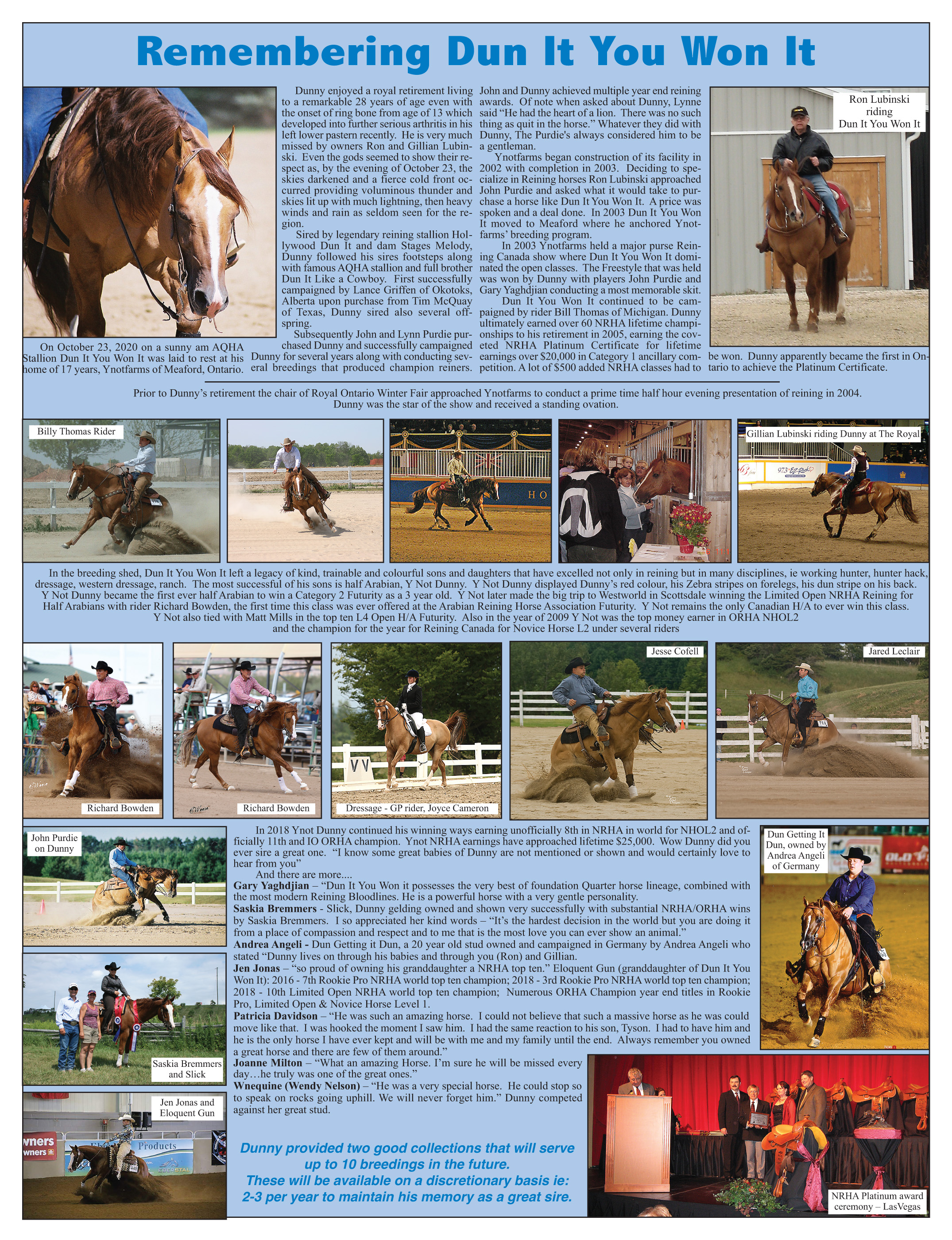 On October 23, 2020 on a sunny am AQHA Stallion Dun It You Won It was laid to rest at his home of 17 years, Ynotfarms of Meaford, Ontario.

Dunny enjoyed a royal retirement living to a remarkable 28 years of age even with the onset of ring bone from age of 13 which developed into further serious arthritis in his left lower pastern recently. He is very much missed by owners Ron and Gillian Lubinski. Even the gods seemed to show their respect as, by the evening of October 23, the skies darkened and a fierce cold front occurred providing voluminous thunder and skies lit up with much lightning, then heavy winds and rain as seldom seen for the region.

John and Dunny achieved multiple year end reining awards. Of note when asked about Dunny, Lynne said “He had the heart of a lion. There was no such thing as quit in the horse.” Whatever they did with Dunny, The Purdie's always considered him to be a gentleman.

Ynotfarms began construction of its facility in 2002 with completion in 2003. Deciding to specialize in Reining horses Ron Lubinski approached John Purdie and asked what it would take to purchase a horse like Dun It You Won It. A price was spoken and a deal done. In 2003 Dun It You Won It moved to Meaford where he anchored Ynotfarms’ breeding program.

In 2003 Ynotfarms held a major purse Reining Canada show where Dun It You Won It dominated the open classes. The Freestyle that was held was won by Dunny with players John Purdie and Gary Yaghdjian conducting a most memorable skit.

Dun It You Won It continued to be campaigned by rider Bill Thomas of Michigan. Dunny ultimately earned over 60 NRHA lifetime championships to his retirement in 2005, earning the coveted NRHA Platinum Certificate for lifetime
earnings over $20,000 in Category 1 ancillary competition. A lot of $500 added NRHA classes had to be won. Dunny apparently became the first in Ontario to achieve the Platinum Certificate.

Prior to Dunny’s retirement the chair of Royal Ontario Winter Fair approached Ynotfarms to conduct a prime time half hour evening presentation of reining in 2004. Dunny was the star of the show and received a standing ovation.

In 2018 Ynot Dunny continued his winning ways earning unofficially 8th in NRHA in world for NHOL2 and officially 11th and IO ORHA champion. Ynot NRHA earnings have approached lifetime $25,000. Wow Dunny did you ever sire a great one. “I know some great babies of Dunny are not mentioned or shown and would certainly love to hear from you”

Gary Yaghdjian – “Dun It You Won it possesses the very best of foundation Quarter horse lineage, combined with the most modern Reining Bloodlines. He is a powerful horse with a very gentle personality.

Saskia Bremmers - Slick, Dunny gelding owned and shown very successfully with substantial NRHA/ORHA wins by Saskia Bremmers. I so appreciated her kind words – “It’s the hardest decision in the world but you are doing it from a place of compassion and respect and to me that is the most love you can ever show an animal.”

Andrea Angeli - Dun Getting it Dun, a 20 year old stud owned and campaigned in Germany by Andrea Angeli who stated “Dunny lives on through his babies and through you (Ron) and Gillian.

Patricia Davidson – “He was such an amazing horse. I could not believe that such a massive horse as he was could move like that. I was hooked the moment I saw him. I had the same reaction to his son, Tyson. I had to have him and he is the only horse I have ever kept and will be with me and my family until the end. Always remember you owned a great horse and there are few of them around.”

Joanne Milton – “What an amazing Horse. I’m sure he will be missed every day…he truly was one of the great ones.”

Wnequine (Wendy Nelson) – “He was a very special horse. He could stop so to speak on rocks going uphill. We will never forget him.” Dunny competed against her great stud.

Dunny provided two good collections that will serve up to 10 breedings in the future. These will be available on a discretionary basis ie: 2-3 per year to maintain his memory as a great sire.