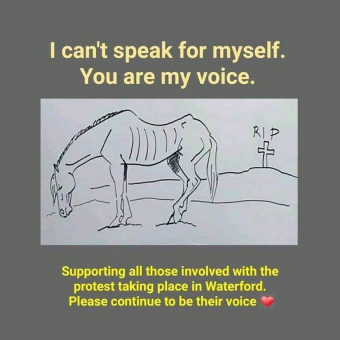 Petition calls for the Minster of MCSCS to immediately suspend further funding to the OSPCA and to conduct a forensic audit of how this significant amount of public money has been spent.

My name is Brenda Thompson and I am the Chief Executive Officer of Whispering Hearts Horse Rescue Centre.People who know me know that I care deeply about the prevention of cruelty to all animals. I wish I could say the same for the Ontario Society for the Prevention of Cruelty to Animals (OSPCA), but I think the recent and ongoing events we’ve experienced involving horses at a property in Waterford, Ontario show that the OSPCA has lost its way and no longer has the protection of animals as their priority.

Animal protection laws in Ontario, are enforced by the OSPCA not the police.The OSPCA had the legislated authority to protect these horses in Waterford but they have failed miserably. The OSPCA Act enables the OSPCA to take prompt, preventive action including checking to see whether the Act’s standards of care for animals were being complied with as soon as they were informed that these horses appeared to be poorly cared for, which was six months ago. In the last few days as the condition of these animals worsened, the OSPCA had the authority to enter the property without a warrant with the information they’d been provided that the horses were in immediate distress. At any point from the time this situation was brought to the OSPCA’s attention, they had the authority to write orders to the animals’ owners to force them to provide the horses with appropriate care and necessities or – if necessary – to remove the animals for the purpose of relieving their distress. The OSPCA took none of these steps to prevent these poor animals from suffering, including one horse who had to be euthanized.

I do not blame the front-line OSPCA investigator assigned to this case for this tragic situation. We were told by the investigator that she would come to the Waterford property yesterday at 9am, but she did not arrive. At 4pm we were informed by the Deputy Chief Inspector of the OSPCA that no OSPCA investigator would be arriving. I want to know who prevented the investigator from showing up yesterday morning and taking appropriate action. If a senior official at the OSPCA did this, I believe that person should be removed from their position and possibly charged with a provincial offense including obstructing an OSPCA investigation or permitting an animal to fall into a state of distress.

In late October, we learned that the OSPCA had directed its investigators to cease taking on cases that involve farm animals and horses. It is a great concern that this preventable tragedy at Waterford is a result of that heartless and cowardly policy.

The provincial Ministry of Community Safety and Correctional Services (MCSCS) administers the OSPCA Act and they have a $5.75 million annual funding agreement with the OSPCA. I believe the events of the last few days and weeks in Waterford prove that the OSPCA has not complied with the terms and conditions of that funding agreement. Most importantly, the agreement requires the OSPCA to provide province-wide coverage, and to operate a call centre from 8am to 8pm so as to deal with reports of animals in distress in a timely fashion. Clearly these important commitments were not met this case. Cruelty to animals does not conveniently happen only on weekdays between 9am and 5pm!

The MCSCS funding agreement also requires the OSPCA to operate a public complaints process, although the OSPCA does not mention this process on their website as required by the funding agreement. I intend to follow up with them and MCSCS to formally complain about how the investigation in Waterford has been conducted. The public deserves answers.

I have already begun circulating a petition that calls for the Minster of MCSCS to immediately suspend further funding to the OSPCA and to conduct a forensic audit of how this significant amount of public money has been spent. The OSPCA already provides local service in only about half the province and they have made themselves unaccountable to anyone but themselves by eliminating board elections and annual general meetings. It is outrageous that an organization that has become so ineffective and unaccountable continues to receive public money and donor dollars while failing to do the important job they were created to do: protecting all animals in the province of Ontario.

My petition also calls for the creation of a new animal protection system in Ontario where service is delivered more effectively and accountably by the public sector, not by an unaccountable charity. The OSPCA did a pretty good job for most of the last hundred years since the OSPCA Act became law, but I believe the recent events in Waterford confirm that it’s time for a change.

If you would like more information about Whispering Hearts Horse Rescue Centre, the situation in Waterford or about my petition to the Legislature of Ontario, please contact me at 905-768-9951.