Many questions remain after protest in Waterford 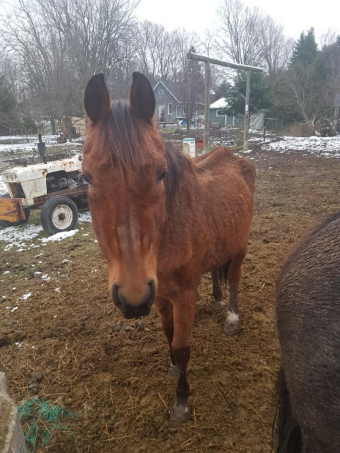 “There didn’t appear to be adequate or consistent feeding” describes Tupper who made more than a few calls to the OSPCA herself.

by Ellie Ross, special to The Rider

On Friday November 30th, a horse loving commuter, Natalie Tupper, posted about three horses she watched gradually and consistently become thinner over the past six months, in a field visible from the road. Her concerns grew to the point where she knocked on the door. She received no answer and discussed this with the neighbours, who she claims advised her that they had made calls to the OSPCA.

“There didn’t appear to be adequate or consistent feeding” describes Tupper who made more than a few calls to the OSPCA herself.

Tupper says she was assured by the OSPCA, that there was an open investigation yet states the horses’ condition appeared to be deteriorating as she saw no signs of adequate feeding. 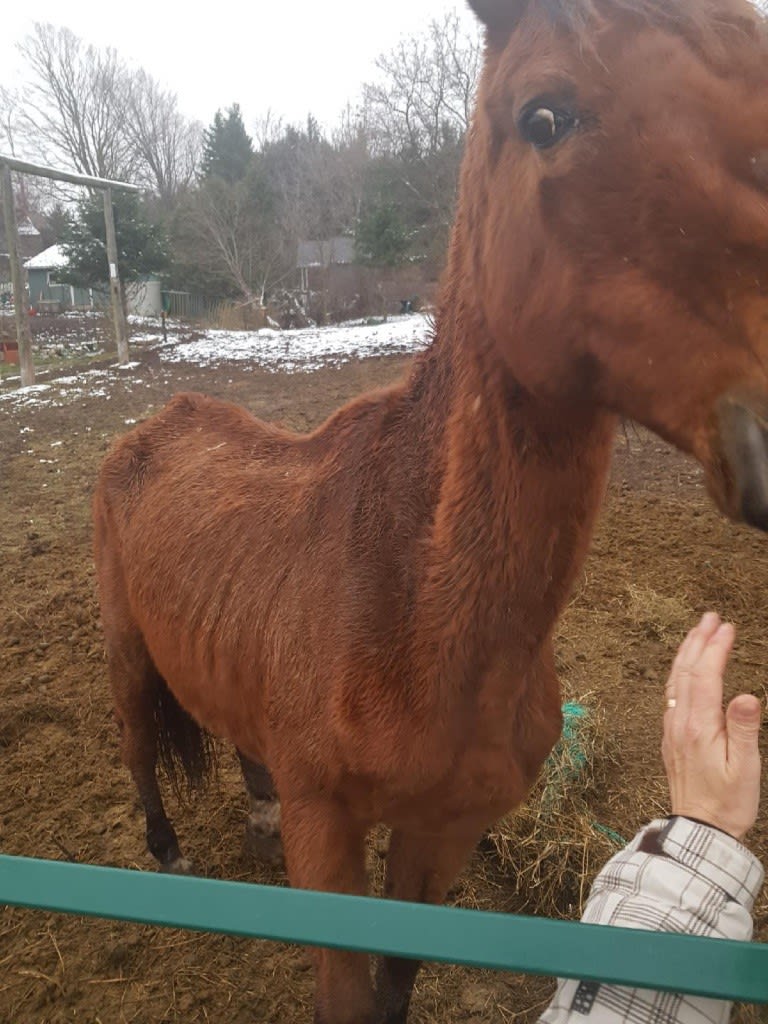 Friday night she turned to the OPP, who she says in turn, called the OSPCA. “I will never forget the desperate whinnies and screams from these horses as I approached the fence,” to which Tupper describes as ‘heartbreaking’.  Tupper was disheartened to be informed that no veterinarian or OSPCA officer would be arriving that night. A coordinated effort between the OPP and a nearby neighbour, brought temporary relief to these horses, when a bale of hay was delivered and devoured. “They were clearly very hungry and appeared to have no problem eating it”. Tupper states the fact that the OPP arranged for hay is evidence that there was no hay onsite.

One horse known as ‘Simcah’ was visibly emaciated and there was an attempt to remove this horse from the property the following morning. ‘Simcah’ was loaded on a trailer that, Tupper later learned, had no authorization, not even by the owner, but at the time, Tupper’s only concern was the horse itself.

“This horse was too weak and I tried to explain to the driver that I didn’t believe the horse would survive the trip” but all I got was swearing and yelling,” says Tupper “so I blocked the driveway so they couldn’t take him away. ‘Simcah’ was kicking and screaming in the trailer.” 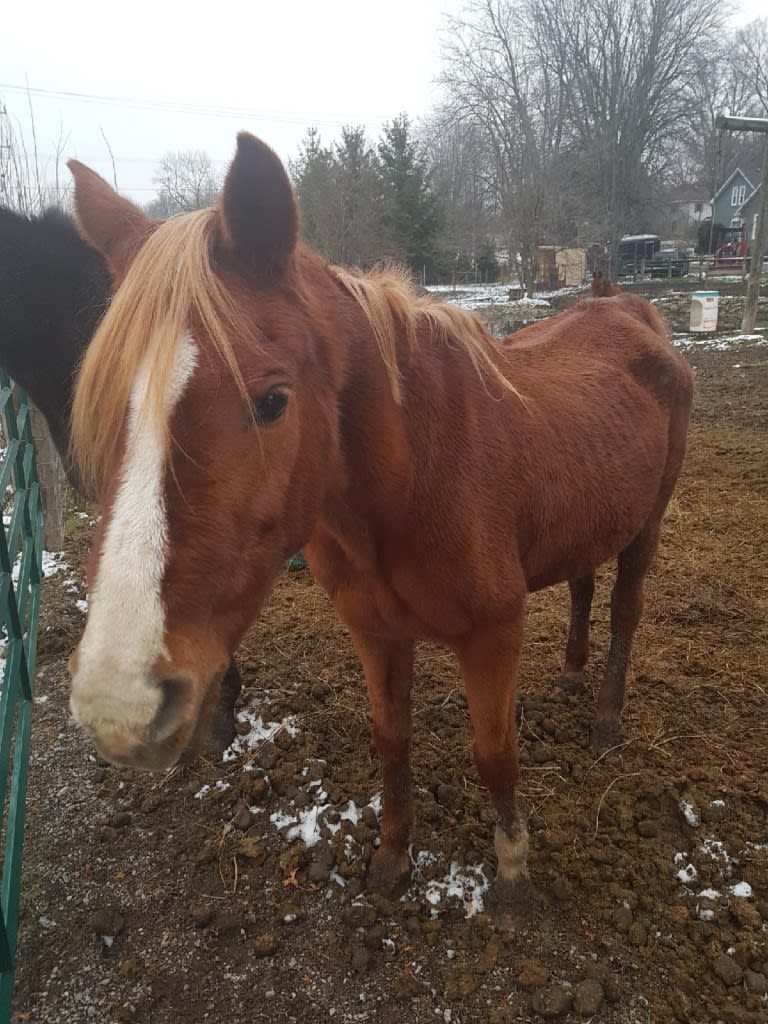 Soon enough, the ‘two legged herd’ (people that organized themselves via social media’) arrived and a protest began. Signs demanding the horses be released to Whispering Hearts Horse Rescue (WHHR) were quite a surprise to WHHR CEO Brenda Thompson, who arrived on the scene but had no knowledge of the protesting effort.

Thompson became involved upon hearing from Tupper, that there was an attempt to remove the horse before the OPP or OSPCA arrived. Thompson was quick to make calls - “I contacted the OSPCA and was advised that there were no orders on the horses at that farm.

On December 1st a veterinarian from Edwards Veterinary arrived. The horse was unloaded and after what is described as a short exam was euthanized right on the driveway. This sparked an emotional response from some of the people watching from the road.

The two remaining horses were moved into the garage to be housed in what was described as makeshift stalls, with straw bedding, hay and water. Blankets were provided by WHHR and placed on the horses. The remaining mares were described by Thompson as being in poor body condition.

An OPP negotiator partnered with Thompson and made an attempt to have the owner relinquish the horses but this was unsuccessful. Another surprisingly unsuccessful effort was made by an unnamed Oakville woman who allegedly offered $10,000 for the horses. Following the decline of her offer, the Oakville woman shopped for supplies such as heaters for the protesters that were camping out day and night on the road.

The events that followed included what seemed to be a conflicting battle of social media statements between Tupper, WHHR, Edwards Veterinary and the OSPCA.

Upon my contacting the OSPCA, I was advised that my questions would be answered in their media release and they invited any additional questions. They were prompt to respond to my emails and admitted that they had received several calls about these horses over the past year. They stated “The OSPCA has attended the property and followed up several times as each concern was brought forward over the past year”.  This statement is disturbing to Thompson who heavily questions why orders were not written during that time.

The OSPCA states that the horse that was euthanized had a pre-existing medical condition and was under veterinary care which they claim means they do not have the ability to intervene.

Edwards Veterinary stated in a since deleted Facebook post that they had seen these horses six months ago and made phone calls to the proper authorities following that first visit. The contact that followed was requests that care visits be booked. Edwards Veterinary claims they contacted the proper authorities and they cannot force anyone to comply or come to their clinic. It was also stated online, that the second visit did not occur until December 1st. That was the day ‘Simcah’ was euthanized.

December 1st, the OSPCA posted a statement online that read ‘The Society would like to reassure the public that we have been out to visit the animals several times and have addressed any concerns reported’. They also went on to claim the owners were cooperative and that the horses always had food, water, shelter etc. each time they were followed up on.  Tupper demands to know why she didn’t see hay in front of these horses on her daily drive by and why ‘Simcah’ got to the condition he did under what she calls ‘the watchful eye of the OSPCA’.

On December 5th, the OSPCA stated that they wrote orders on December 1 and December 3rd but both Thomson and Tupper state that there was no OSPCA officer on either of those dates and questions how orders could have been written.  “We were expecting the OSPCA at 9:30 am. An OPP liaison along with others were left waiting all day. They (OPP) called and were told that an OSPCA officer was on the way. At 4:30 pm a call was received from OSPCA Inspector Jennifer Bluhm to advise that no one would be attending. What a waste of resources. We were there 24 hours a day each day and no OSPCA officer arrived until December 5th. How can they write orders if they were not there?” said Thompson. The protest was nothing but peaceful and closely supervised by the OPP according to Thompson. “There was no valid reason to not attend”.

The day before (December 4th), Edwards Veterinary arrived to examine and treat the two remaining horses housed in the garage. Thompson states the horses were being fed and watered but expresses doubt this will continue once the pressure is off.

There have been no charges laid or seizures ordered at the time of this submission.

The OSCPA posted online that animals can only be removed if:

There are many questions surrounding this case that need to be answered.

The protest has since disbanded and the road was closed by the OPP to ensure the safe exit of all present.

Requests to interview Edwards Veterinary, the horse owner and the OPP had gone unanswered at the time of this submission. The OSPCA shared that in 2017 they investigated over 15,000 animal welfare concerns that were reported, issued close to 4000 orders to improve standards of care, laid 573 provincial charges and 21 criminal charges, removed over 1200 animals as a result of investigations.

The fate of the two remaining horses ‘Trina’ and Diamond’ remain unknown and the investigation remains open.

In the meantime, WHHR is circulating a petition regarding changes to Animal Protection in Ontario. The petition can be acquired and shared by contacting them at whhr08@gmail.com or via their Facebook page.