Barn or Yard: Where does a horse choose to spend its time? 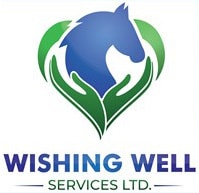 Do you ever wonder what your horse is up to?

Our horses live in a large bank barn with the door always open to their paddocks. Over the years, their whereabouts would often surprise me. Once during a particularly nasty storm with driving winds and icy rain, I found them all outside with their tails to the wind, tinkling with ice. Conversely, on pleasant summer afternoons, I would often find them all in the barn. My observations seemed contrary to conventional turnout practises, so I decided to track my horse’s location by GPS.

In 2019, we had a mixed herd of eight horses at our farm near Guelph, Ontario. The horses live on a nine-acre pasture with access anytime to shelter in a barn that consists of a 740-square-foot common stall with six standing stalls. When seasonally required, free-choice hay is always available in three widely spaced OptiMizer slow feeders in the paddock and hay bags in the standing stalls. Water is also available in the paddock and in the common stall. The horses are turned into their box stalls once daily for about an hour for grain, grooming, and health checks. Otherwise, the horses can choose to be in the barn or in the yard.

The horse I studied was our 20-year-old Kentucky Mountain horse named Whisky. He is the most dominant horse in the herd and can be anywhere in the pasture or barn without opposition from the other horses. His location also seemed typical of the rest of the herd, since they tend to stick together as they move from place to place.

I attached a Garmin eTrex-10 GPS to Whisky. In the winter, I braided it into his tail and in the spring/summer, I attached it to the chin strap of a breakaway halter. The batteries were replaced daily and we kept a log of all human interactions and barn temperature throughout the study periods. Whisky has a seasonally appropriate natural coat and blankets or fly sheets were not required over the study periods.

Whisky’s location was tracked by the GPS every minute for three seasonal study periods totalling 571 hours: January 25–February 4, 2019 (winter), May 19–26, 2019 (spring) and July 5–15, 2019 (summer). The data was downloaded into Garmin MapSource and Whisky’s location each minute was classified as either “barn” or “yard” based on the GPS coordinates. Location data was summed for each hour for comparisons of location to time of day and weather conditions. Hourly weather data was collected from the Guelph Turf Grass National Weather Station, which is located 10 km northwest of the farm. This data included temperature, wind speed, wind chill, and humidex. 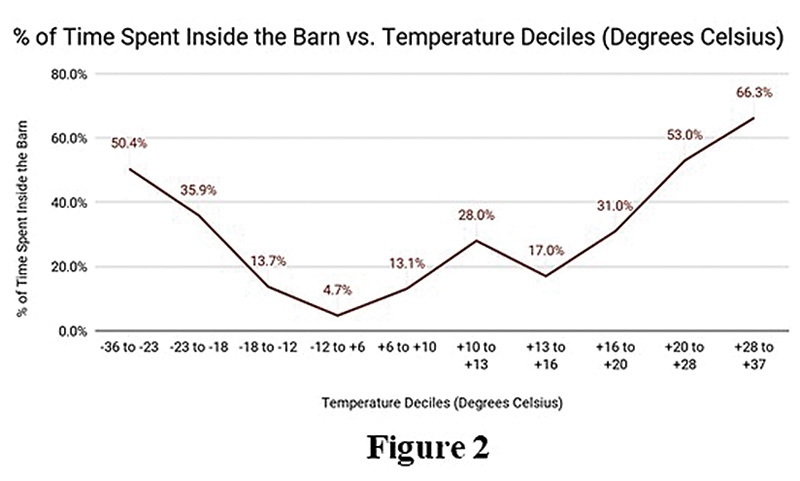 Barn or yard - where was he? 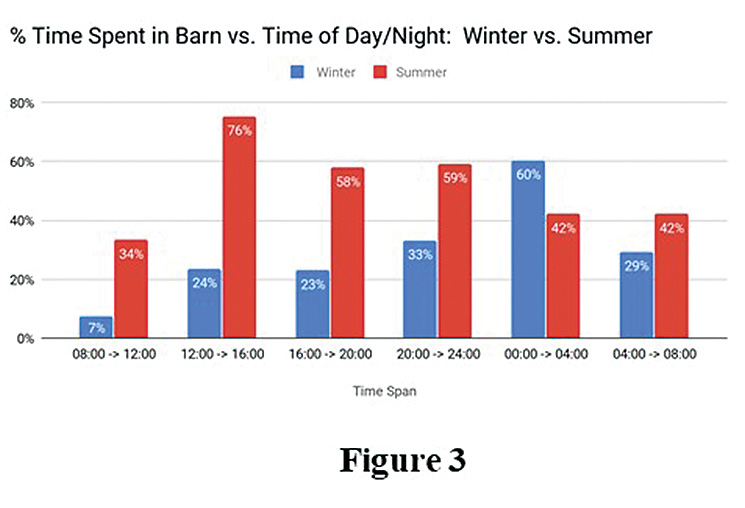 What does this mean?

Stabling and turnout practices are dependent on many factors such as barn type, number of horses per acre, size and shelter in paddocks, food and water sources in paddocks, gender mix, health and work requirements of individual horses and owner preferences.

It seems to me that a lot of horses are kept in stalls most of the time, with many stables limiting turnout to a fraction of the day and keeping horses in during the night and in cold weather. This makes sense based on our human schedules and needs. But does it make sense when you consider how sleeping and eating schedules differ between humans and horses?

● Humans sleep for 7 - 9 continuous hours, once a day, of which 90 -120 minutes is REM sleep. Conversely, horses power nap sporadically over 24 hours, resulting in 5 -7 hours of rest time and 30 minutes of REM sleep.

● Humans eat 3 meals a day, consuming a lot of food in 3 short periods of time. Conversely, horses evolved over time to consume small amounts of food throughout the day and night, spending 10 to 17 hours grazing during 15 to 20 grazing periods.

Taking a look at turnout from a horse’s perspective helps us to re-ask some fundamental questions:

1. How much turnout is optimal for my horse?

2. What time of day or night is the best for turnout? Does this vary with the season and weather conditions?

3. What weather conditions, if any, should my horse be kept in?

In our study, Whisky chose to spend most of his time outside. His choices were primarily related to temperature and less so to the time of day. For example, during what I consider to be cold, cool and moderate temperatures ( -18 to +20ºC), he was outside 82% of the time. Even in terribly cold weather (-23 to -36ºC), he was outside half the time! Conversely, in warm temperatures when I tend to enjoy lazing around outside (+20 to +37ºC), Whisky chose to spend the majority of that time (60%) in the barn. 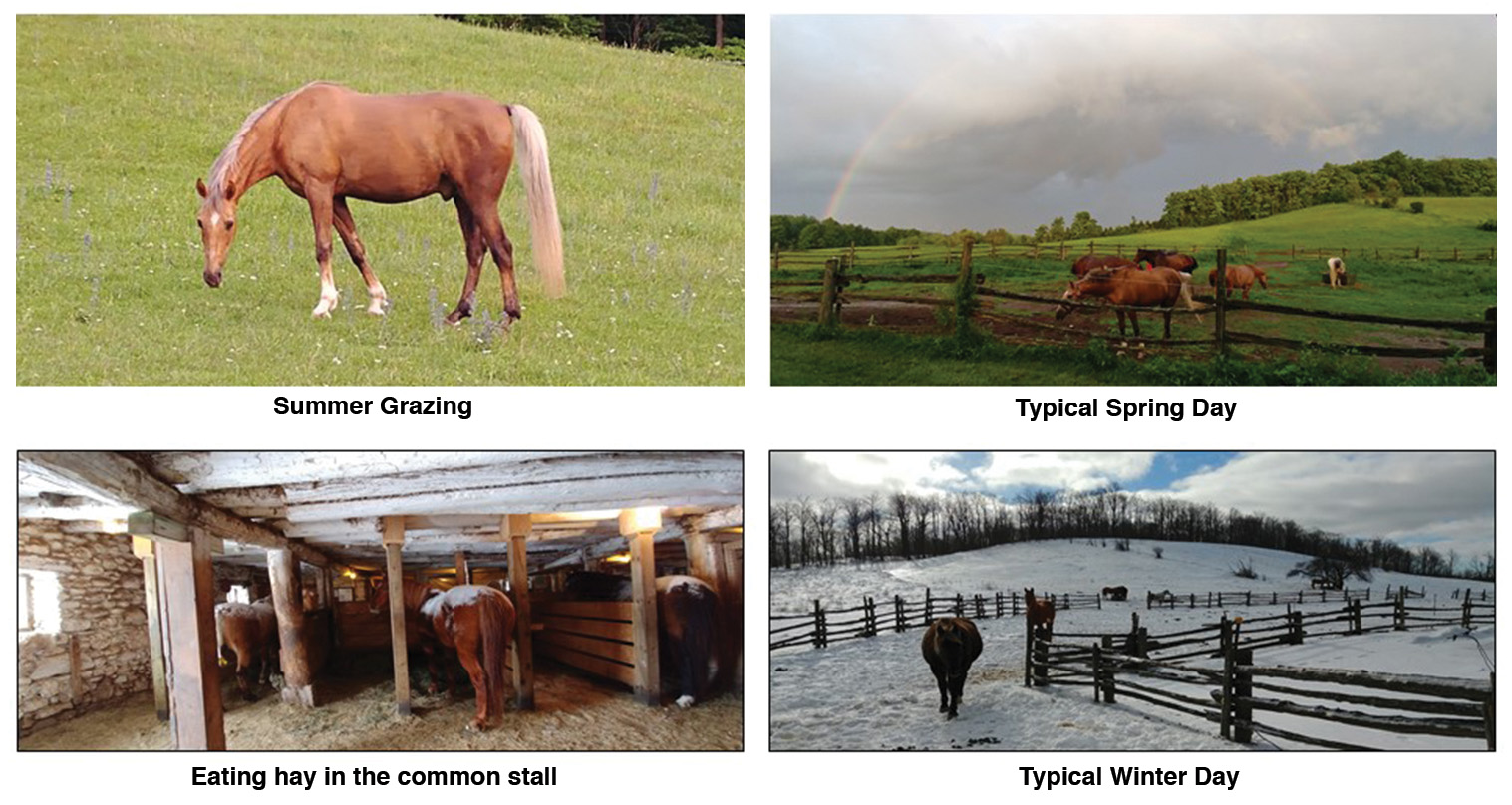 Most interestingly, Whisky’s choices were not consistent with typical turnout schedules. Contrasting two extremes: - He was outside continuously from 9:21 pm February 1 to 12:56 am on February 2 in a windchill of -22ºC versus choosing the shelter of the barn at -8ºC. - He was in the barn continuously from 12:41 to 3:48 pm on July 6 when the temperature outside peaked at 37ºC at 2:00 pm and the barn temperature was a relatively cool 22ºC.

Our stabling set up lets our horses decide between the barn or the yard every minute of every day. For stables that have to make these choices on behalf of their horses, turnout could be optimized each day if it is considered from the perspective of a horse.

*this article is based on the results of a study presented at the 15th International Equitation Science Conference held at the University of Guelph on August 19, 2019