We are very excited to announce that our Owner Barry Finn has been inducted into the Can-Am Hall of Fame!

Barry Finn was born and raised in the Hamilton and is the owner and publisher of The Rider, Ontario’s Horse Industry Newspaper. His father, Aidan Finn started The Rider in 1970 and was also Can-Am’s very first Hall of Fame inductee in 2013.

Barry has worked for The Rider most of his life. At age 12 he was selling copies of the publication in the grandstands at Quarterama.  Over the years, he has worked in every department from circulation and composing to editorial and advertising sales – and reporter. Many Ontario riders have met Barry at various association dinners or other events where he gathered information and took photos for the following issues of The Rider.

In 1990, Barry took over the active development of The Western Rider and started a sister publication called English Rider.  He merged the two papers in 1994 to form The Rider, an all breed, all discipline newspaper and in 2005, Barry became publisher and owner of The Rider. In 2004 The Rider was named OEF’s Media Of The Year that continued for the following five years. Barry was also president of the Independent Publisher’s Association of Ontario for many years.

The Rider is celebrating 48 Years in business this year. Understanding that the future of media also includes online information, Barry acquired the Barnmice social networking website in 2012. Since then, he has also expanded the reach of The Rider with online advertising and an online edition. 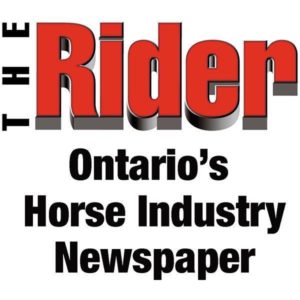