Cherry’s influence reached across Canada and the globe through numerous EC accreditations.

Cherry was presented with the 2018 Equestrian Canada (EC) Lifetime Achievement Award in recognition of her long and illustrious career as an official, which spanned from 1981 until her retirement at the age of 88. 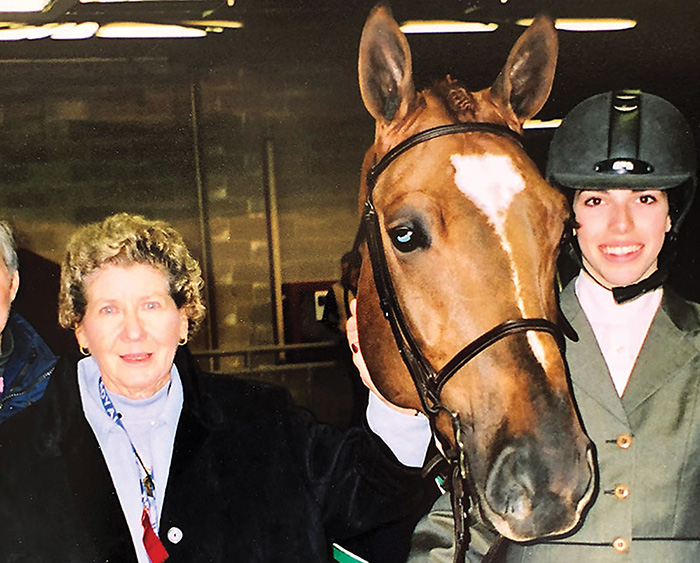 Cherry’s influence reached across Canada and the globe through numerous EC accreditations. In 1981, she earned her first official’s card as a Dressage Steward and later held Senior Steward status for all disciplines until 2018. Cherry was also a Recorded Judge for hunter, hack and hunt seat equitation, and jumping from 1986 until 2000.

In addition to her contributions at the national level, Cherry became one of Canada’s first FEI stewards in 1993. She was one of several stewards who were instrumental in implementing the FEI steward program nationwide. During the first four years of the program, Cherry acted as steward for all FEI jumping competitions throughout the entire province of Quebec. At the moment of her retirement, she was ranked as an FEI Jumping Steward 3.

Cherry’s fabulous sense of humour, unwavering moral compass and impeccable knowledge of the rules led to her presence being heavily requested at both local and international competitions. She was incredibly sought-after as a clinician and mentor, and was greatly respected and admired by her peers. The level of participation that Harriet sustained for nearly four decades as an official was immeasurably essential to the facilitation and growth of equestrian competition.

“Harriet was a shining light in the Canadian equestrian world and her loss is deeply felt,” said EC CEO, Meg Krueger. “Her tireless work helped lift our sport to where it is today and we will continue to honour her legacy for years to come.”

PHOTO – Equestrian Canada offers sincere condolences to the family and friends of the late Harriet Cherry (left) of Ottawa, ON, who passed away on Feb, 2, 2021, at the age of 89. PHOTO CREDIT – Courtesy of Anne Claassen