“Today was just an emotional rollercoaster of happiness and joy,” said Barwick.

Tokyo, JPN, Aug. 31, 2021 – Lauren Barwick of Aldergrove, BC, and Sandrino (sired by Spirit of Westfalia) lit up Baji Koen Equestrian Park with a lively Individual Freestyle Test on Aug. 30, 2021, at the Tokyo 2020 Paralympic Games in Japan.

Barwick, 43, and Lee Garrod’s nine-year-old Westphalian gelding originally missed the top-eight Freestyle cut off by the narrowest of margins in the Grade III Individual Test on August 27. However, a withdrawal by Rix Van der Horst and Findsley of the Netherlands during the horse inspection the morning of the competition suddenly bumped the Canadian combination back into action.

“I got the phone call [on the bus back to the Paralympic Village] and my hands got all sweaty. I was really surprised and so pleased and grateful to the universe for the opportunity to ride for my freestyle because it’s one of my favourite tests to ride,” said Barwick, who has now made it to the Freestyle in each of her five Paralympic appearances and won gold at the Beijing 2008 event with Maile. “It was a very fast five or six hours, frantically unpacking and looking for stuff – none of what we would normally do to prepare for a test happened but man, did we pull it all together as a team.” 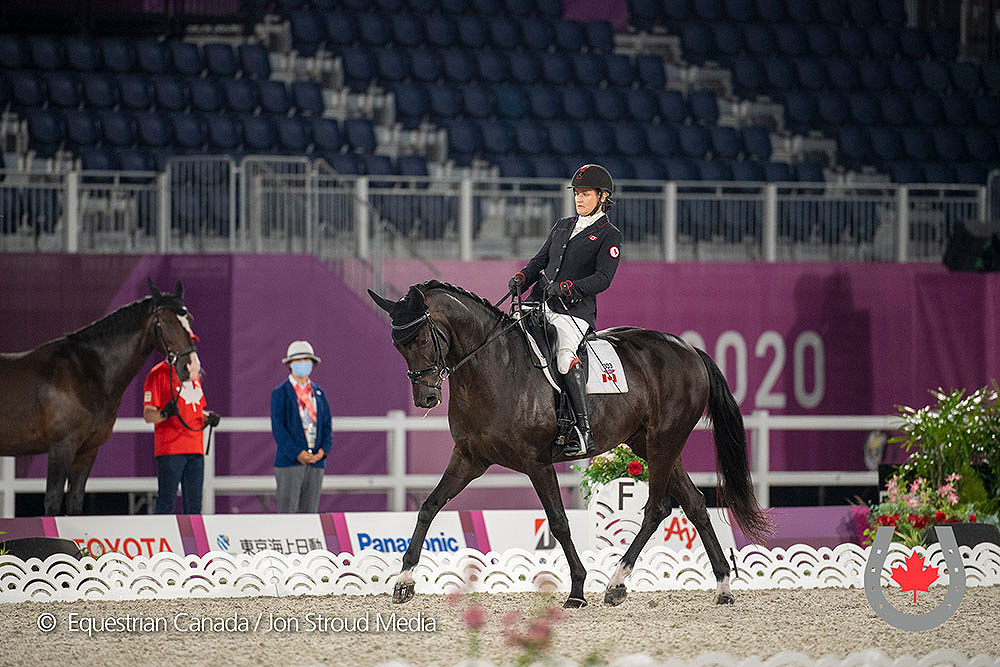 In their performance, Barwick made clever use of the entire arena dancing to upbeat instrumentals that highlighted Sandrino’s transitions, including music from the 2017 film, The Greatest Showman. Despite a costly break into the canter, technical proficiency in movements such as compulsory circles and consistent trot work combined with a high artistic score of 74.480% to put Barwick in sixth place on a final score of 72.507%.

“Today was just an emotional rollercoaster of happiness and joy,” said Barwick. “Sandrino felt the best that he has felt in the warm-up and then just felt a little bit tense in the test, had a little spook and some tension. That’s just young horse stuff; he has very little experience in an environment like this. He goes in there and he’s still a little bit of a tourist.”

Speaking of her fellow Grade III athletes, Barwick continued, “These are the best riders in the world. They didn’t just wake up a month ago and say, ‘Hey, let’s go to the Paralympics,’ so the judges know what they’re looking for. They’re looking for that level of refinement at this stage to really reward us with those scores that we’re looking for. We just don’t have that yet so I’m pleased but not so pleased with the scores. I’m not going to let that take away from the fact that today, I got to take Team Canada into the arena and I was dancing for the other riders. At the end of the day, a lot of people say it’s such a good experience to get to go [to the Paralympics]. It’s not about the experience, which has been great, but we are earning the right to be our country’s first choice. That is what is worth the hard work and makes the journey worth it.”

On the Grade III podium, Denmark’s Tobias Thorning Jorgensen and Jolene Hill captured their second individual gold of the Games on an untouchable score of 84.347%. Silver was awarded to Natasha Baker and Keystone Dawn Chorus of Great Britain, who scored 77.614%, while bronze fell to Norway with Ann Cathrin Lubbe and La Costa Majlund’s 76.447%.

The Individual Freestyle was the last event for the Canadian Equestrian Team (CET) at the Tokyo 2020 Olympic and Paralympic Games. Hood commented, “As we wrap up the 2020 Tokyo Games and reflect back on our performances, we have moved forward from Rio 2016. Credit needs to be given to our technical advisor, Clive, and our staff lead, Christine, for building and supporting a vision for the program to move forward. Equestrian Canada is proud of all our athletes who have continued to improve. Although there were no medals, this Games has shown that we are a team that was seen by the nations around us and we will continue to move forward. Now is the time to reflect and challenge our riders to move forward.”

For more information on equestrian events at the Tokyo 2020 Paralympic Games, including the full schedule of equestrian competition and results, please click here. Further information on the CET can be found at on the Equestrian Canada #RidetoTokyo webpage.

PHOTO – Lauren Barwick of Aldergrove, BC, and Sandrino rode to a sixth-place finish in the Individual Freestyle on Aug. 30, 2021, at the Tokyo 2020 Paralympic Games in Japan. PHOTO CREDIT – Jon Stroud Media