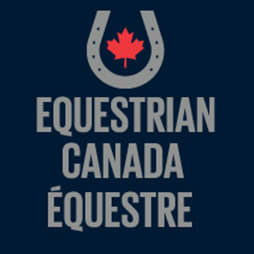 “It was a step up from La Baule size-wise and with a lot of strong teams,” said Underhill.

Not one to mess with a successful format, chef d’equipe Eric Lamaze sent out the same four horse-rider combinations, in the same order, as he had two weeks earlier in the Nations’ Cup of La Baule in France. Yann Candele, Tiffany Foster, Amy Millar, and Beth Underhill – all Canadian Olympians – took on nine other countries in the battle for team honours.

At the half-way stage, the scores were tight with only France having turned in a clear scoresheet. Belgium, the Netherlands, and the United States had four faults apiece while Canada, Germany, Great Britain, Ireland, and Spain were sitting on eight faults. Italy was at the bottom of the leaderboard with 12 faults but, as the home nation, was invited back for the second round.

As the lead-off rider for Canada, Candele, 51, of Orangeville, ON, incurred eight faults in both rounds with Farezzo, a 12-year-old Dutch Warmblood gelding (Arezzo VDL x Van Gogh) that he began riding less than a month ago. Both scores were dropped from Canada’s scoresheet as only the best three rounds count toward the team total.

Foster, 37, of Langley, BC, incurred four faults after slipping in front of the Rolex triple bar set at fence six in the opening round before jumping clear the second time out to buoy Canadian hopes. Her partner was Figor, a 12-year-old bay Dutch Warmblood gelding (Querly-Elvis x Indoctro) that she owns in partnership with Andy and Carlene Ziegler’s Artisan Farms LLC. 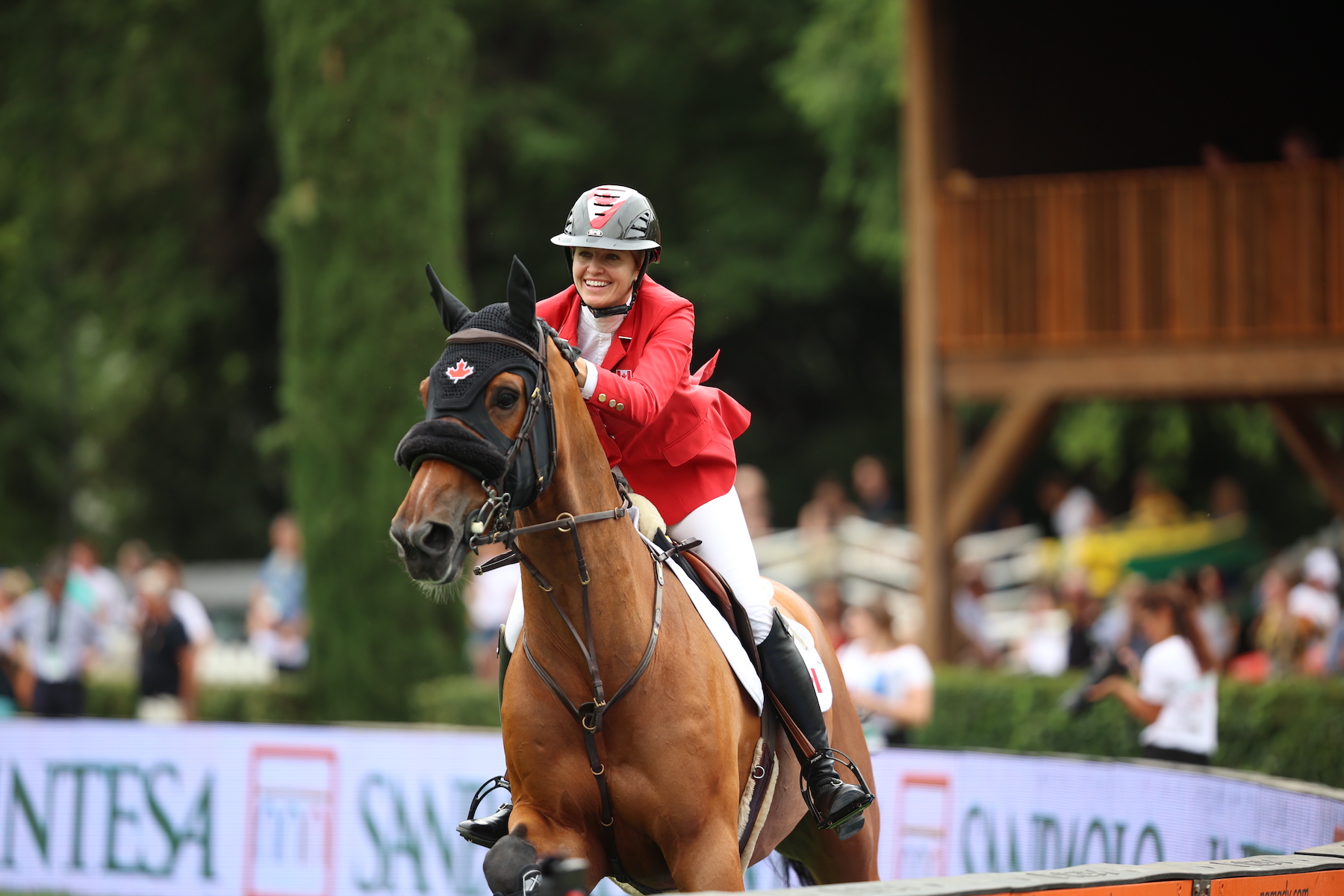 Having jumped double clear in the Nations’ Cup two weeks earlier, not to mention winning the €500,000 Rolex Grand Prix of La Baule, hopes were high for a repeat performance from Underhill, 59, of Mulmer, ON, and Dieu Merci van T&L, a 13-year-old Belgian Sport Horse stallion (Toulon x Corrado I) owned by the Rein Family LLC and Lamaze’s Torrey Pines Stable Inc. The pair came agonizingly close to accomplishing the feat for a second time but finished slightly over the time allowed of 77 seconds in the second round to pick up one fault after stopping the Rolex clock in 77.19 seconds.

Riding once again in the anchor position, Millar, 41, of Perth, ON, picked up four faults in the middle of the triple combination in round one riding her partner of six years, Truman, a 13-year-old Selle Français gelding (Mylord Carthago x Kolibri) owned by Millar Brooke Farm Ltd. and Overlund. The pair returned to jump clear on her second tour of the grass arena at Piazza di Siena, albeit her time of 77.40 seconds cost Canada a time fault. 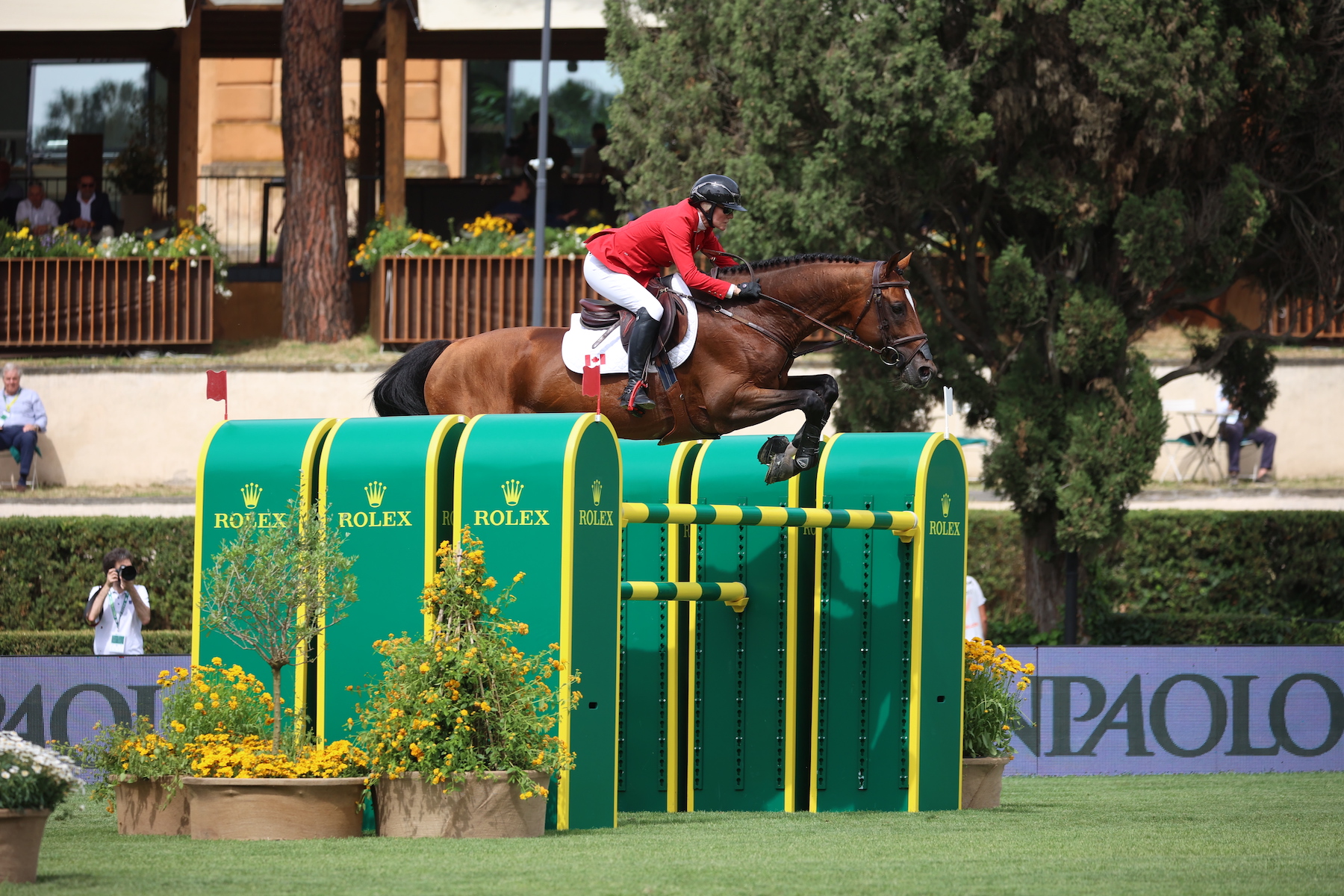 “It was a step up from La Baule size-wise and with a lot of strong teams, I knew we would really have to deliver today,” said Lamaze of the Canadian team’s performance. “Yann is doing his best, but I feel for him; it’s a lot to compete at this level with a horse you don’t know well. Tiffany slipping in front of the Rolex triple bar but keeping it at four faults was impressive. That’s a video that I will show to young riders as a lesson not to give up. Her horse is jumping extremely well.

“Beth, what can you say? Just flawless. She made it look easy. I’m not sure it was Amy’s best day, I’ve seen her do better, but it was more than good enough. She knew it was okay to have a time fault so no complaints there,” continued Lamaze.

With three riders on the French side jumping double clear, victory went to France. As the defending champions, Belgium put up a fight all the way to the end, finally settling for second place with four faults. The Netherlands and the United States both finished on scores of eight faults with the combined times, 222.45 versus 224.68, putting the Dutch team on the podium in third place.

Canada rounded out the top five with a total of 10 faults followed by Great Britain in sixth position with 12 faults. Germany and Ireland incurred 20 faults while Italy dropped out of the running with a final score of 42 faults. Spain failed to make the cut for the second round, leaving it in 10th position.

“Overall, it’s a fantastic group of riders,” said Lamaze, who was the Olympic champion in 2008 riding Hickstead. “To find ourselves in eighth place with eight faults after the first round isn’t bad, then we came back even stronger in the second round. We were two time faults away from the podium, which shows you how strong we were.

“It’s a great Rolex event with a great Nations’ Cup,” said Lamaze of the Italian fixture, which was hosting its 89th edition. “I don’t think there is a more picturesque horse show in the world. The beauty of the show is just ‘wow.’ As chef d’equipe, I’m very happy with La Baule and Rome. It could not have gone better, and we’ve proven that Canada is back with a vengeance. Everyone is riding well, and they’re prepared. They’ve really proven themselves, and Amy has proven that she can anchor this team. I have great hopes that we’ll be on the podium at the World Championships.”

The Canadian Show Jumping Team will return to home soil for the $400,000 CSIO5* Longines Nations’ Cup on Sunday, June 5, 2022, at Thunderbird Show Park in Langley, BC. Mario Deslauriers of New York, NY, Ali Ramsay of Victoria, BC, and Jacqueline Steffens of Harriston, ON, will be joined by Foster and Underhill in representing Canada. Action gets underway at 2 p.m. local time (5 p.m. ET).

Yann Candele of Orangeville, ON, and the recently acquired Farezzo. Photo by Stefano Secchi/ImageSS

Tiffany Foster of Langley, BC, and Figor, owned by Foster and Artisan Farms LLC. Photo by Stefano Secchi/ImageSS

Amy Millar of Perth, ON, and Truman, owned by Millar Brooke Farm and Overlund. Photo by Stefano Secchi/ImageSS