Canada wins Gold in Dressage at the Lima 2019 Pan American Games in Peru.

July 29, 2019, Lima, PER – After fierce competition for the top of the podium, on July 29 the Canadian Dressage Team took Pan Am gold for the first time in 28 years, and earned Canada’s berth to the Tokyo 2020 Olympic Games during the Lima 2019 Pan American Games in Peru. 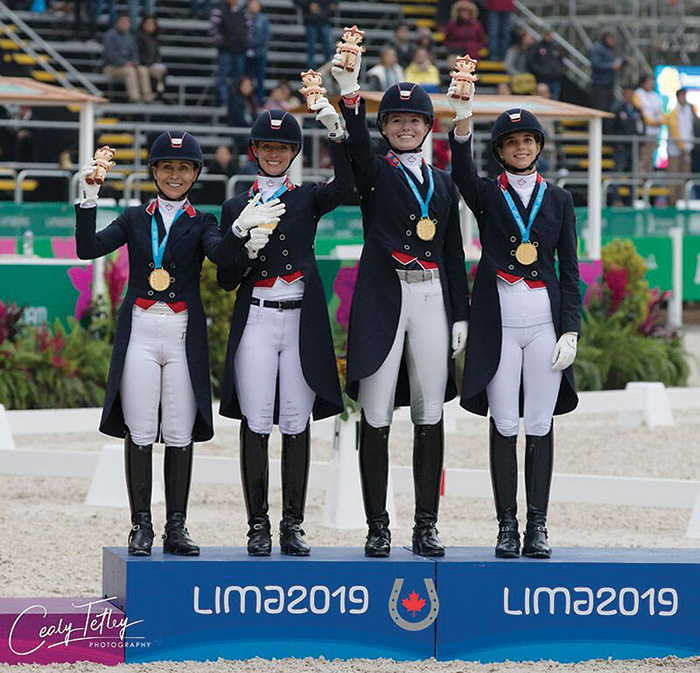 Team members, Jill Irving of Moncton, NB, Tina Irwin of Stouffville, ON, Lindsay Kellock of Toronto, ON, and Naima Moreira Laliberté of Outremont, QC, were neck-and-neck with the United States during the first leg of the team competition on July 28, finishing a fraction behind. They returned to the Team Final on July 29 with laser focus to achieve their dual goals of gold medals, and a spot for Tokyo 2020 as one of the top two teams not already qualified.

The Team Final consisted of the Intermediate I for small tour entries and Grand Prix Special for the big tour, and also acted as the second individual qualifier. Kicking off the Canadian Team’s journey to the podium was small tour combination, Kellock, 29, of Toronto, ON and Floratina (Fidertanz 2 x Rubin Royal OLD), owned by Chloe Gasiorowski. For the second day in a row, Kellock and the 11-year-old Hanoverian mare set a personal best record, receiving a score of 73.147% from the Dressage Ground Jury, which includes FEI 4* Dressage Judge, Brenda Minor of Acton, ON. Their back-to-back third place finishes in the small tour also have them sitting third overall in the individual standings.

“I am thrilled. Today was by far the best feeling I’ve ever had in the ring with Floratina, and I couldn’t be happier – she brought it,” said Kellock, who took over the ride on Floratina less than a year ago, yet has never scored below 70% in a single class entered. “When you go at the beginning, you want to start strong for your team.”

Facing that same pressure to help nail down an early lead was Irwin, 38, aboard her long-time partner, Laurencio (Laurentio x Donnerhall), a 12-year-old Oldenburg gelding she co-owns with her husband and fellow elite dressage athlete, Jaimey Irwin. It was mission accomplished when they became Canada’s top-scoring combination for the second day in a row after achieving 73.853%. Their score would prove to lead the small tour rankings right up until the final entry, Sarah Lockman of the US aboard First Apple. Having finished second in the small tour both days, Irwin and Laurencio are also holding second on the individual leaderboard, with Lockman in the lead. 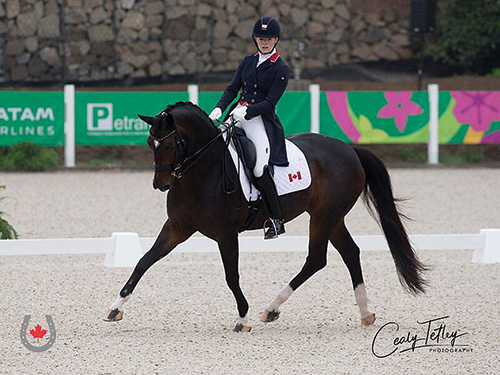 “I needed to go for more energy today, so I did that,” said Irwin, who is attending her second Pan American Games, previously earning team silver during the 2011 edition in Guadalajara, MEX. “No risk, no gain – so I had a little bobble in my half-pass, which was a coefficient, but I don’t regret it because I think you have to go big or go home. You’ve got to go for it, and you’ve got to push, so I’m happy I did that today.”

Speaking to the feeling of winning team gold, Irwin continued, “It’s a huge accomplishment. There was a lot of pressure on our team (to qualify Canada for Tokyo), but we gave it our all today. We brought our ‘A’ game and we’re very, very proud.”

Following the first two flights of riders, Canada had overtaken the US, and after Moreira Laliberté - just 22 years of age and making her major games debut - stayed cool under pressure to earn 71.787%, the gold medal became a mathematical certainty for Canada. Riding Statesman, a 12-year-old Hanoverian gelding sired by Sandro Hit and owned by KML S.à.r.l., Moreira Laliberté won both the Grand Prix and the Grand Prix Special as an individual and is currently sitting fourth on the overall leaderboard. 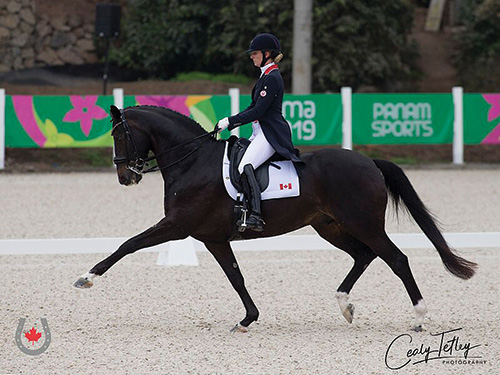 “The goal today was a really steady and clean ride for the team, and we achieved the plan, so I’m really happy about that,” said Moreira Laliberté, who is the daughter of Cirque du Soleil founder, Guy Laliberté. “Once I realized that this is a big venue, but really, it’s another sandbox that just happens to be here at the Games, then I just focused on riding like I usually do and that took my pressure away.”

Irving, 56, also contested the big tour, finishing third in the Grand Prix Special and contributing a score of 67.851% to the team aboard Degas 12 (De Niro 6 x Regazzoni), a 17-year-old Hanoverian gelding owned by Irving and Windhaven Farm. Irving also took third in the Grand Prix during the first day of competition to stand 11th on the individual leaderboard.

“Degas is in great form but he was spicy yesterday, and really spicy today, and it cost me some very expensive mistakes,” said Irving, who also rode Degas 12 for Canada at the 2018 FEI World Equestrian Games in Mill Spring, NC. “But, my teammates made up for it. I’m really proud of our team. I think it’s great to be coming in the second day a little bit behind – you don’t have to ride defensively, you just put on your ‘A’ game, and that’s what they did. It’s been an amazing Games. The 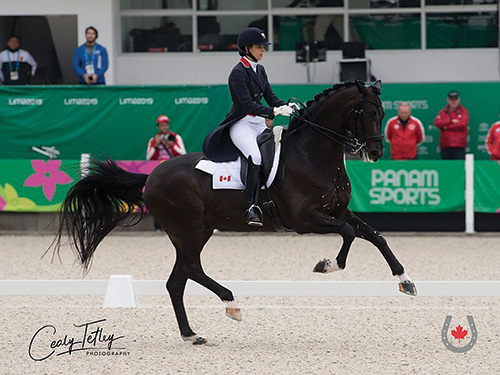 venue is world class, the footing is great, the stabling is great, and the food is amazing. Honestly, it’s been epic.”

“Coming here, right from the start, there was no question that we were here to win gold. That was the goal and they made it happen.” said Canadian Dressage Team Chef d’Équipe, Christine Peters. “These girls rode their heart out for Canada and I’m very proud. What impressed me the most about this group is how they came together as a team and supported each other; the four of them have been like sisters. To have them bring home team gold for Canada for the first time in so many years is incredible.”

Next up for Canadian dressage athletes will be the Grand Prix Freestyle and Intermediate I Freestyle on July 31, where the individual medals will be decided. The top 50% in the rankings 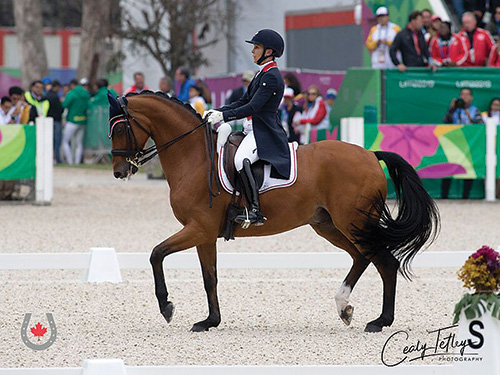 from both the big and small tour will move forward into the individual final, with the caveat that a maximum of three athletes may move forward per country. Competing for Canada will be Irwin, Kellock and Moreira Laliberté.

For more information on equestrian events at the Lima 2019 Pan Am Games, including the full schedule of equestrian competition, entries and results, please visit www.lima2019.pe/en. Live scoring for equestrian can be found here.  To follow the CET’s #RideToLima through results coverage, behind-the-scenes content and breaking news, visit www.equestrian.ca/events-results/games/ridetolima and be sure to check out EC’s Facebook, Twitter, and Instagram for unique content, including a daily photo album.

Photos from top to bottom: